Uruguay is a country with a strong respect for the rules of the game and the essential grounds of the economic activity. This is why it ranks among the top countries in Latin America according to the main rankings which gather information on aspects of political stability and democratic soundness. In Uruguay there are no differences in the treatment of national and foreign capital and incentives to investment promotion are available for both. There are no limits for foreign capital endowment in companies either. 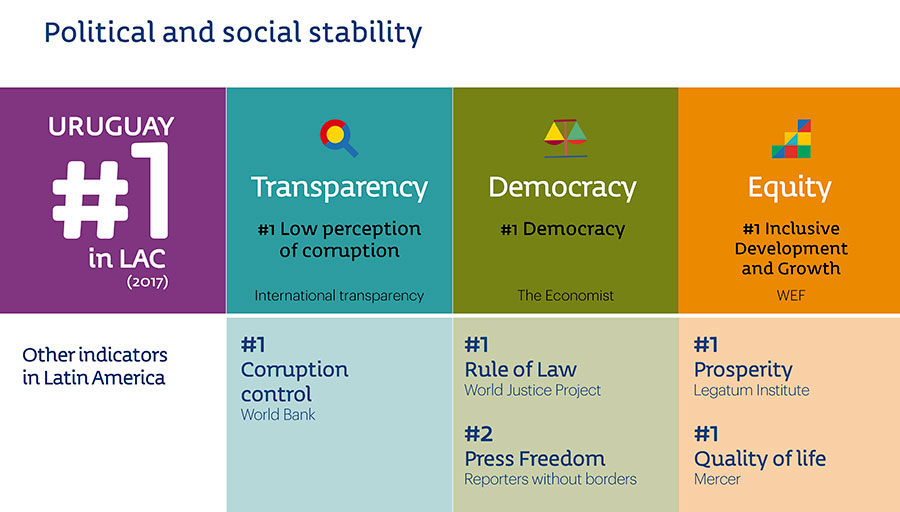 The tax system is also neutral with regard to foreign investment and it is not necessary to register or request prior authorization to make an investment, with the exception of environmental authorization. Moreover, Uruguayan laws currently in force expressly provide for the existence of bank and tax secrecy that can only be lifted by request of a foreign tax authority of a country with an approved information exchange agreement with Uruguay, request that must be previously authorized by the Uruguayan judicial authority. There are no limits to income or capital transfer or repatriation and no previous permits are required. The exchange market is free, with no restrictions for the purchase or sale of foreign exchange and investments may be made in any currency.

There are no limitations in order to hire contract foreign workers (with specific exception detailed in the norm). Moreover, favorable foreign investment policies result in stimuli for both foreign immigration and Uruguayan citizens who have lived abroad.

For years the country has shown a strong political and social stability, supported by a consolidated democracy and strong legal certainty. This consolidated institutional framework, the deep respect for democracy and the low corruption of the country have placed Uruguay in the first position in the Democracy Index compiled by The Economist Intelligence Unit (2015) and the Perception Corruption Index of Transparency International (2015) with respect to other Latin American countries. Uruguay is internationally recognized for its strong tradition of respect for intellectual property, since it has regulations that comply with the European Union standards.